Useful Tricks to Help Your Child Give Up the Pacifier 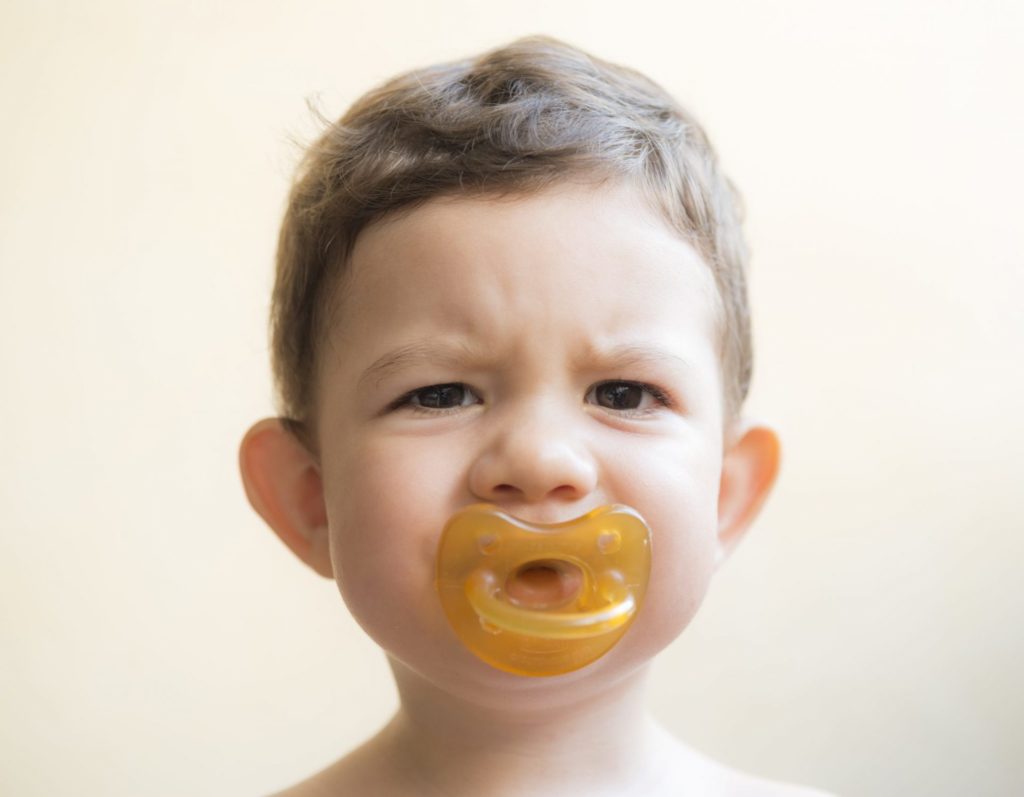 Generally speaking, little ones love their binkies. They satisfy the “suck reflex” babies often have associated with bottles and breastfeeding. This provides a calming and soothing effect, which is helpful at night and at naptimes especially if a baby is fussy or fighting sleep.

It is not a surprise therefore that parents are advocates for soothers as well. Pacifiers often provide some peace and quiet and can help a baby get to sleep while being rocked or held. What’s more, although no exact reason has been proven, there has been a direct correlation in many studies conducted between pacifier use and lower rates of SIDS (sudden infant death syndrome).

There are pros and cons to pacifier use, and every child and parent is different. There is no set age or set time recommended by experts, as many of them differ in opinion.

As long as an infant is able to break his or her binky habit by the time multiple teeth begin to grow in, there shouldn’t be any reason the pacifier should affect their long-term dental health. This is especially true if a child is reduced to only using it at night or naptimes.

Pacifiers can help with teething and soothing the gums but they should never be dipped in juice as this can cause cavities on baby teeth. Some babies do not need a binky as much as others. If a baby is able to be soothed without one it is best to not force the habit upon a child before attempting soothing in other ways – rocking, feeding, etc.

Unfortunately, many toddlers get into such a habit of using the pacifier that not only will they not stop asking for it, but after a parent finally takes it away, they can develop the habit to suck their thumb. Prolonged habits of thumb-sucking can eventually cause misalignment as teeth are growing in. If the thumb-sucking continues, it could call for the need for braces later on.

#1 Take it Away Early

Reportedly, some parents have taken a pacifier away as young as 3 months old, suggesting that it is much easier to stop the habit of a newborn than a toddler. Other parents recommend simply limiting it at around 3-6 months old, strictly to bedtime and naptime. Of course many would make exceptions to this – long car rides or airplane trips – but it is believed by many that the younger, the better. Weaning the pacifier does not always work for older children and can cause confusion and arguing.

One of the ways to stop a child from wanting their pacifier is to “break” it. It is never recommended to cut the tip of a binky with a scissors, as small pieces off it can break off and pose a choking hazard. However, by simply taking a thumbtack or needle and poking a small hole at the tip, air will freely pass through. This will cause the child to think it is broken as it will no longer satisfy the sucking reflex.

#3 Use them to “Buy” Something Else

If there is something your child desperately wants, be it a new toy or a pet goldfish, explain to them that it can only be purchased by the Binky Bank. Help them gather up all the pacifiers in your home and put them in a container to be offered in exchange for the item. As they physically donate to the Binky Bank they will be reminded that there are no more pacifiers in the house and they will better understand prioritizing by giving up something they want for something they want more.

Whatever you as a parent personally decide is the right time for you and your child, schedule a date that they will no longer use the pacifier. You could use a memorable day that could indicate a milestone for your child – for example, their 3rd birthday, followed by a statement such as “big girls/big boys don’t need binkies!” Up until that time remind them of the day they will no longer be able to use their pacifier. This will give them time to accept it and process through it, as giving up the habit cold turkey can be very difficult for some children. Once you have made a decision, do not change your mind! There may be a few times after this day that they will ask for their binky again, but remind them of the time they became a big kid and stand your ground.

Similar to the Binky Bank, but instead with a giving mentality. If your child is old enough to understand the concept, explain to your child that there are children younger than them who need their pacifiers, and that they are too old to keep theirs. As you encourage them to press toward the decision of giving them away it may be helpful if there is a younger cousin or neighbor toddler to use as an example. Round up all the pacifiers in your home with your toddler and leave them for the “Binky Fairy”  at night who hands them out to new babies being born. If it is around the holiday season, make the suggestion of leaving them for Santa Claus.