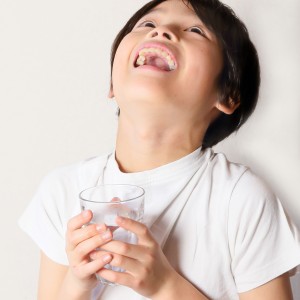 Mouthwash can be one of the most refreshing steps of a daily routine. It removes excess bacteria, strengthens enamel, whitens teeth, and provides instant fresh breath. Mouthwash is the step in a dental oral hygiene regimen that can provide extra protection beyond brushing and flossing. At the Kidd’s Place, we specialize in being able to recognize the different needs presented with kids’ teeth. Here are some things you need to know about your kids using mouthwash.

Fluoride is a mineral commonly used to strengthen teeth and to prevent cavities from forming. It is primarily found in toothpaste, mouthwash, and even most water systems in the U.S.! However, it is not recommended that a child uses fluoride toothpaste regularly until after age 2 (except for a small smear on their toothbrush), and mouthwash until after age 6. This is due to the risk of fluorosis.

Fluorosis is something that can happen in the process of children’s teeth developing. It occurs when there is an overexposure to fluoride. It can cause the outer texture of the tooth to become bumpy, or white or brown spots to appear on the teeth. While fluorosis only causes issues in appearance and can be easily prevented, it can be difficult to remove.

Knowing When the Time is Right

Despite mouthwash not being recommended until age 6, every child is different. That being said, age 6 is just about the time adult teeth are starting to come in and certain baby teeth are beginning to loosen. When introducing a child to mouthwash for the first time, it is most important that they have the self-control and awareness to not swallow it automatically as they would a beverage.

To know whether a child is ready to use mouthwash without swallowing, there is a simple test: using a cup of water by the sink, ask the child to swish it around in their mouth and to spit it out. If they are able to do this without swallowing, then they will most likely be able to do it with mouthwash. Make sure it is used after brushing and flossing.  It is not recommended to allow children ages 6-12 use mouthwash unattended.

For additional practice, try supervising your child in the form of a game. Use a mouthwash recommended for children that does not have that strong or harsh taste. With a stopwatch in hand, say “Go!” and time your child for exactly a minute as they swish and rinse.  Feel free to cheer them on and have fun with it. When it reaches a minute yell “Stop!” and have them spit. This is excellent practice that engages parents and kids and allows them to adjust to the sensation of swishing.

For young teens, braces can be immensely time-consuming when cleaning. Mouthwash is an excellent tool because it can reach places that plaque can build up that is perhaps difficult to reach with floss or a toothbrush alone. It can also loosen very small bits of food that can get lodged in the braces. This does not mean flossing or brushing should ever be neglected; mouthwash is meant as an additional cleaning agent and should not be used exclusively on its own for cleaning, especially since braces present such an opportunity for bacteria and plaque to flourish.

The Long-Term Benefits of Mouthwash

For adults and kids alike, mouthwash is designed to boost the effects of brushing twice daily, and flossing once daily. Talk to your child’s dentist whether a fluoride mouthwash is something that should be introduced to his or her oral hygiene regimen. Most dentists will even have a specific brand or type they would recommend. Instilling these habits early on can ensure a lifelong healthy smile!