The Truth About Teething

There are many misconceptions revolving around the phenomena of teething.  Every symptom under the sun has been ascribed to a child’s teeth breaking through.  However, recent studies have revealed that cases of high temperatures, bad earaches, or stomach pain really can’t be blamed exclusively on a child’s teeth coming in.  As dentist Michael Hanna of the American Association of Pediatric Dentists has pointed out, every child experiences teething differently.  The amount of pain experienced is directly related to the thickness of the gum tissue and the child’s given pain tolerance.

While there are no set of symptoms that can be ascribed exclusively to teething, it is very common to see an increase in,

Any extreme case of these symptoms is more than likely a separate incident and your child’s pediatrician should be consulted.  Drooling is perhaps the most widely associated symptom with teething.  While the exact reason that teething babies have a tendency to drool so much is unknown, it is assumed to be related to an increase in muscle movement.  When a child is teething and gums are inflamed, it is normal for them to be moving their mouths around more consistently.  This movement activates the salivary glands thereby increasing the amount a child drools.  When this is taking place, do your best to keep your child’s face and chin as dry as possible to avoid the development of a rash.  Sometimes it’s helpful to keep a bib on if drooling is particularly bad.

When a child’s teeth begin to come in, it is typically the bottom two front teeth that will make the first appearance.  The upper front four teeth usually follow these.  Since these are the thinnest teeth and have a sharp edge to them, they break through the easiest and tend to cause the least amount of discomfort for the child.  When the molars begin to break through, expect a little more discomfort and irritability from your child.  Molars are bigger teeth with a broad surface, making their cutting a bit more eventful.  On rare occasions, a child may develop a bluish looking cyst on their gums where a molar is about to break through.  This is caused by a build up of fluid beneath the surface and is not to cause alarm.  When the tooth finally does break, there is often blood released with it.   Simply wash out your baby’s mouth and all is well.  However contact your child’s dentist if you notice abnormal sensitivity or swelling after the tooth has erupted. 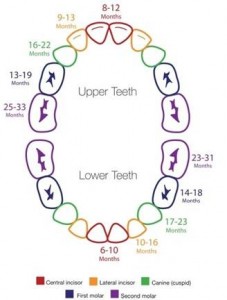 Once your baby has begun the teething process, be careful of what they are putting in their mouth.  While they may be drawn to hard surfaces, try and keep them chewing on appropriate toys, pacifiers, and teething rings.  If left unsupervised, chewing on surfaces that are too hard can actually do considerable damage to the new teeth coming in.  Many parents have one trick that they swear by to soothe irritated gums.  Here are some that are commonly used:

-piece of frozen banana wrapped in a damp washcloth

-a small dose of infant Tylenol at bedtime

Not every remedy will work for everyone and sometimes a child may not respond to any of them.  However, don’t resort to numbing oral gels.  Recent studies have shown them to be quite dangerous and related to several severe health conditions.  Stick with infant Tylenol instead.

Also remember that as soon as a child’s first tooth has broken through, it’s time to see the dentist.  Establishing a child’s healthy oral habits early is imperative to creating positive habits that will last a lifetime.  Having an expert keep their eye on your little one’s teeth is important.  A dentist can save your child from unneeded cavities and the oral discomfort if given the opportunity to have regular check-ups with your child every six months.

Beginning the habit of brushing your child’s teeth or even cleaning their gums with a damp cloth is important.  Even before your child’s first tooth has appeared, make sure to wipe his/her gums after every meal.  This will make your child more comfortable when it comes time for brushing and will keep their mouth clean of harmful debris.  Also, resist the urge to put your child to sleep with a bottle or by nursing.  Set aside meal time and keeps bottles of milk and juice to those times.  Once a child gets used to the pattern of falling asleep with a bottle, that habit can be hard to break.  But doing so is imperative once their little teeth start coming in!  So be sure to avoid beginning the habit so you won’t have to break it later on.

When your child begins teething, keep in mind that mild symptoms are to be expected, but that anything resulting in an abnormal amount of discomfort for them is more than likely a separate incident.  Your child’s pediatrician should be contacted accordingly.  Should there be any complications with one of your child’s teeth coming in, don’t hesitate to contact your child’s dentist.  More often then not however, teething irritation is short lived and is no cause for concern.